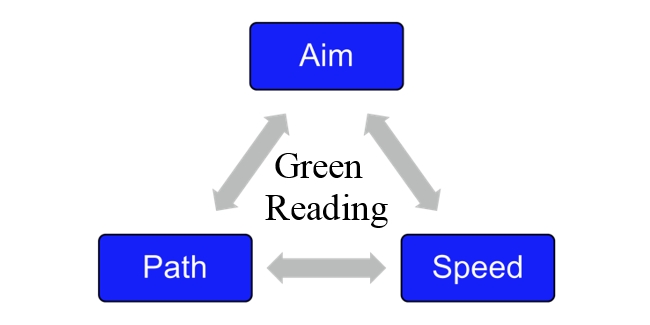 In putting, there is a definite correlation between Aim, Speed, Path and Green Reading. If a player lacks the ability to control any one of these variables than he or she will compensate by equally altering another variable. Compensations are difficult to repeat and require a lot of practice. In the following paragraphs you will learn how these variables are interrelated and how to improve each one, most importantly aim and speed.

Aim is a player's ability to aim his or her putter relative to a target. It is imperative for a player to aim the putter head at the intended target so not to need compensating action during the putting stroke. Aim is strictly visual and is based off of his or her perception of the design of the putter. Every design characteristic of a putter will have an influence on how a person aims it, including head shape, hosel shape, offset, line configuration, length, loft, lie, etc. By placing a mirror on the putter face and shooting a laser from a target to the mirror, a player will see where he or she is aimed. By experimenting with different putter configurations, a player can find the correct putter that matches his or her eye perception, thus ensuring proper aim.

Speed is a player's ability to control distance relative to a given target. Speed is function of Aim and Aim is a function of Speed, the two need to match for a putt to go in the hole. It is important to note that the effective delivery speed for a ball to capture the entire width of the hole is no more than 8" past the hole, if missed. A player's ability to control speed is directly related to their sense of touch, which is a response to the weighting of their putter. Putter design including, head weight, counter weight, internal shaft weight, and shaft flex, influence how a player perceives the overall weight of the putter, thus impacting their ability to control speed and distance.

Path is a dynamic response to how a player controls aim and speed. Humans are very talented creatures and through trial and error, we will alter the path of the putting stroke to match our ability to control aim and speed. To compensate for improper aim a player may alter the path and/or putter face to roll the ball on the intended line. The same is true for a lack of speed control; a player may roll the ball faster or slower to maintain an intended line. This compensation is very hard to repeat and takes a lot of practice to be partially proficient at. So if a player can accurately control aim and speed, he or she will naturally be able to control path more efficiently, thus creating a more repeatable stroke and holing more putts.

Green Reading is a player's ability to hypothesize the path that the ball must take in order for it to fall into the hole. With proper speed control, a player will have a better assumption of green reading. Green Reading interrelates with aim and speed because even if a player makes a proper read, he or she must be able to produce the correct aim and speed to hole the putt.

If any one of these variables is off, a player will need to compensate with another variable to offset the initial inaccuracy. It is important to first address aim and speed to begin to understand a player's faults and develop a plan for improvement. A player's perception of the design of his or her putter is the number one factor influencing their ability to control aim and speed. Once aim and speed have been corrected, a player may begin improving path and green reading. Eliminating one variable at a time is the best way to simplify putting. The putting triad is a great way to better understand the importance of Aim, Speed, Path, and Green Reading, and how each variable directly influences a player's ability to consistently putt well.

I hope this information leads to better putting. If you would like more information or to address any other issues, feel free to reply to this post or contact me in a private message.

Henry Stetina is a PGA Instructor, has played golf for 20+ years, and has coached golf for the last seven years. He specializes in coaching putting and short game with emphasis on the mental game. He is currently a certified club fitter for Edel Golf. As a player, Henry has competed at nearly every level of the game, the highest being the PGA Professional National Championship in 2012.