A lot of people talk about the importance of a pre-shot routine, but rarely do I hear people describe how to develop one. Most accomplished golfers have a pre-shot routine with physical components that we identify with, but that doesn't give us information about what is going on in their mind. On most golf broadcasts they only show the players as they address the ball and play the shot. Unfortunately, golf broadcasts often miss the conversations between player and caddie and the moments leading up to a shot. Have you ever notice that Aaron Baddeley closes his eyes as he stands behind his ball and faces the target? I assume he does this to either visualize his shot or to calm his emotions. What about Keagan Bradley's pre-putt routine? He tilts his head to the right as he reads his putts to try to see the line of putt, as he will when he addresses the ball. Tiger talks to the media about "getting into his own little world," and " going through the process." I imagine he is alluding to his mental thoughts as he prepares to play a shot, his pre-shot routine, and his zone. Being able to witness these moments gives us so much insight into the minds of the greatest players in the world and yet we rarely have the opportunities to experience them.

I believe that at the heart of every shot is a mental routine that is completely vital to the outcome of that shot. I feel that a player must practice the mental pre-shot routine on every shot they hit, whether it be practice or play, for a player to truly reach his potential. Jack Nicklaus said "I never hit a shot, not even in practice, without having a very sharp, in-focus picture of it in my head."
My routine consists of a process where my entire goal is to get into a state of mind of complete clarity, focus and calmness. As I stand behind the ball, I visualize my intended shot with as much imagination and detail as possible. I visualize a line, starting at my target that runs back to my golf ball and on to infinity (FYI... This is the target line). Like Baddeley, I close my eyes to calm my emotions and focus my mind on the task at hand, and with a deep breath I open my eyes and begin to walk into the address position. After my final look at the target, I swing the club with my mind's eye vividly focused on the target.

I do my best to keep the picture clear in my mind, and trust my natural ability to send the ball to my target.
I believe the mental routine including visualization is a vital part of the game that we often overlook. Develop a mental routine that you can use on every shot. It should consist of assessing your situation, visualizing your intended shot, having confidence in yourself to execute it to the best of your ability, and accepting the results. Do this, and you will be on your way to playing better golf.

Henry Stetina is a PGA Instructor, has played golf for 20+ years, and has coached golf for the last seven years. He specializes in coaching putting and short game with emphasis on the mental game. He is currently a certified club fitter for Edel Golf. As a player, Henry has competed at nearly every level of the game, the highest being the PGA Professional National Championship in 2012. 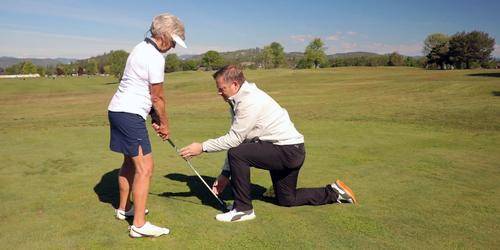 What You Need to Know as a Beginner Golfer

Be Open to Tough Rough